Sister Roselind got invited to Capstone church by a friend. She had a fall 2 years ago which broke 3 of the bones on her back. They healed up, but not in their perfect state, which caused her back to be deformed. The Doctors refused to operate. The fall had also damaged her knee, but she didn’t focus much on the knee as her back was causing her more trouble. Pastor Rakesh had given an altar call for those who required healing that Sunday, and she went up. After prayer, her knee started to work again. She is now able to walk without much trouble or pain. Praise God!

Family expanded – Fruitfulness is our portion

Nikhil and Priya have been praying for a child. They are now blessed with a beautiful baby boy!

God over every situation

2015 has been one of the toughest years of Nithya’s life. She was in pain emotionally and physically. Nithya was hospitalized for 3 months straight due to a severe illness. She was starting to lose sight at the light at the end of the tunnel. Even through all this, one thing that she was sure of was that God remained good, and He is the Lord over her life. Today, she is out of hospital and feels great! Nithya now attends the Revival Life School of Ministry and is loving the deeper sense of Identity that she has received in her Daddy God! She passed her driving test, which kept getting interrupted due to several hospitalizations over the last 2 years! In March 2016, Nithya got victory over a visa battle that she had been fighting for 4 years! A fight that was next to impossible to win, was possible with God. When Jesus says yes, nobody can say no!

Nilushini was being harassed, bullied at put down at her work place. Her seniors/ managers made her feel worthless to the point that she believed she was not good enough. She started losing drastic amounts of weight and was becoming unhealthy due to work stress. Following all the hurt and disappointment she decided to leave her workplace without any back ups. The Capstone family kept her in prayer and reassured her that the Lord would provide for her needs. The Lord opened up a job for her – where she is appreciated for the work she does. She now looks forward to going into work! God has blessed her in her complete surrender.

The Lord provided a mortgage free house for Ruth and Ruban in a well known area. This was next to impossible for the budget that they had! Pastor Preethy and Mathew prayer for them and released the word into their lives, Ruth and Ruban grabbed hold of this word and saw it take root in their lives.

When Aaron started in a new school, he has a fear of getting into the swimming pool, which he had developed from his previous school. For 1.5 years, he had refused to get into the pool. The Lord has cast that fear out – He now swims very well, and refuses to come out of the pool! Aaron’s teachers have been so impressed with his progress. The Lord has given Aaron many breakthroughs in 2015!

Candice works at a homeless hostel and was helping to put on a Christmas lunch for them. At the last minute, the volunteers that usually organize the lunch and the food were unable to come. Candice then started writing down a list of all the things that she needed to buy for the lunch and was overwhelmed. She then prayed to God and said ‘Lord, how am I going to get all of this? Please HELP!’. As an immediate response to her prayer, the phone rang. The man on the other side of the phone asked Candice if they needed anything for Christmas day. He ended up buying everything on the list Candice had made! God provided for the lunch supernaturally.

Ask and you shall receive

Akash (14) attended the annual conference at Capstone Church in 2015. He was trying to get in touch with God, but was unable to. Toward the end of maximum the Lord showed up and answered his prayer. He said ‘I was hit pretty hard by God and was gifted with tongues’. God never fails to show up!

Healed by Declaring and Decreeing

Sunita was hospitalized with a case of UTI, dehydration and low blood pressure, which led to a kidney infection. Sunita attended the annual conference, Maximum 2015, where she was moved by a talk that was given by Miranda Nelson on ‘Declaring and Decreeing’. She went home and Declared – NO MORE UTI! Sunita returned the next day for the conference and Miranda declared that someone in the congregation was healed of UTI. Sunita is now completely healed of UTI!

The Young touched by God’s power

Shaun (15) attended Capstone Church’s annual conference, where he was touched by the power of God. His life has radically changed and he rejoices in his relationship with daddy God. He was one among many of the youth that had a encounter with the Holy Spirit at Maximum 2015, one like never before. God showed up and changed their lives!

The Lord has given us a sound mind

After having challenging behavioral issues, George Jr, by God’s love and grace – travelled on a plane to India and back in his best possible behavior! Even during his stay there, he remained good.

Joy is our God’s language!

Daniel Smith was filled with the Joy of the Lord at Maximum 2015. He had a revelation of what a joyful and fun-loving God, our Father is! Daniel has been overflowing in God’s joy ever since, even at his workplace! What a joyous, generous Heavenly Daddy we have!

Muriel has been praying for wisdom with regards to what to do with her property back home, she was unable to find any buyers for 2 years. Now, the people from across the road of her property have purchased it and use it as church offices! Glory to God for this breakthrough!

Yohan and Nilani have seen the grace and love of God over their lives in 2015. Yohan had lost his dad 2 years ago, he had family debts and loans to repay. Yohan and Nilani got married in 2015 and still had enough money to clear all their debts! Pastor Rakesh and Pastor Preethy have guided them in every stage of this journey. All glory to God for the breakthrough in their finances!

Uma had been praying for her family property that was caught up in a court case in India. Their family was about to lose their house and properties. The Lord gave her supernatural favour over the property, and the judge ordered 3 times more of the share just for her family!

Preetha’s mother in law had a knee dislocation following a surgery. The doctors said she might need another, more risky surgery. Instead, she asked for prayer and the team prayer for healing. By the grace of God, her mother in law is improving very well! Praise God.

Met in church and now married!

Geri has said that 2015 has been a very bitter sweet year for her. It has had its highs and lows, but through it all she has seen God work marvelously. Her biggest testimony is her husband. She says ‘2015 will always mark the year I got married to the most amazing guy I have ever met. Getting married is a testimony, getting married to James is an even bigger one! God is so good.’

There is peace in God’s Kingdom

Vimala has a friend who is from a muslim background and a single parent with a child who has challenging behaviors. Her friend was going through a very tough time. Vimala met up with her friend one day, and the friend could see noticeable changes in Vimala. Vimala was now able to share her testimony and encourage her friend. The friend wanted to know more about Jesus and Viamala had the wonderful opportunity to spread the good news of Jesus. Vimala later gave her friend a Bible. The friend has now said that she reads the bible and feels at peace. She now goes to a church and a sense of normality has returned to her life. She has also managed to get her son into a good school that meets his needs. Praise God!

Healed from pain in the leg

Mary met a lady in front of East Ham station, who had evident pain in her leg as she was limping. Mary asked if she could pray for this lady. By the laying of hands and the miracle working power of Jehova Rapha, she was instantly healed and filled with the Joy of the Lord! The lady then asked Mary to keep in prayer several other family members who were suffering from illnesses. Our God is a miracle working God!

We have the keys to heaven!

Uma had been praying for a job that was able to sponsor her visa as well. During the yearly fasting and prayer in Jan 2015, the Lord blessed Uma with a job that she desired. She was filled by everlasting joy worshipping to the song ‘I have the keys’ that was composed by Pastor Preethy and Rachel. Uma says ‘ I am so blessed to be a part of Capstone Church’.

Jeevan and Sarayu’s car had broken down in 2014. During the Fasting and Prayer in 2015, Jeevan asked the Lord for a car with certain specifications. The Lord supernaturally blessed them with the exact car that he had asked for! The Lord knows our desires and wants to fulfill them! 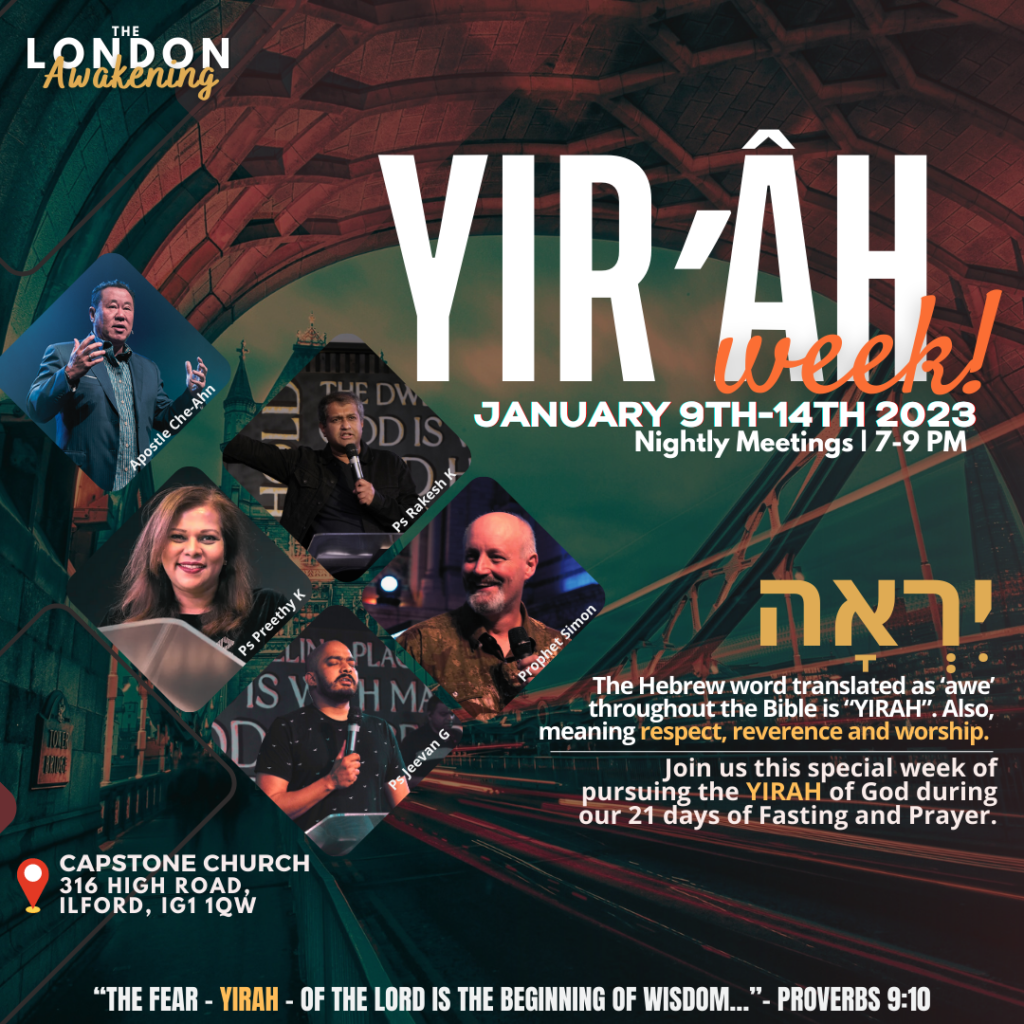